Ashford House Nursing Home prides itself on delivering high quality, tasty, nutritious meals to our residents. Our catering team is headed up by Terry Tiernan. Terry joined Ashford House after a successful career in the restaurant industry. Terry and his team boast a huge repertoire of menus ensuring that residents can choose from a wide variety of meals and snacks on a daily basis.
Our catering team don’t stop at providing meals for the residents of Ashford House, they fully integrate into the staff of the nursing home to help care for the residents. An example of this is the slimmer’s club set up by Terry for residents wishing to lose weight. This hard work has
been recognised by Nursing Homes Ireland as Terry has won the

Catering and Nutrition Award from Nursing Homes Ireland after being selected from 300 applicants.
The catering team also worked closely with our administrator to publish a picture menu book of every meal on offer in Ashford House for those that struggle to read.

Tadhg Daly, Nursing Homes Ireland Chief Executive Officer, congratulated Terry upon his success. He commented “I want to take this opportunity to congratulate Terry for his excellent achievement in winning the NHI Care Awards 2012 Nursing Home Catering and Nutrition Award. Food is of course crucial to our health and wellbeing and in communities across Ireland, caterers and catering teams are playing critical roles in meeting the dietary and taste requirements of persons in nursing home care. Nominations were received from nursing homes across Ireland so Terry’s achievement is an outstanding one.”

Denise expressed her delight at Terry receiving this award and stated that it was very well deserved and recognised all of his dedication, innovation and many achievements in Ashford House.

Terry said he was both honoured and delighted to accept the award and expressed his thanks to NHI, the judging panel, and all in Ashford House.

As meals are an important part of our lifestyle, we at Ashford House aim to provide healthy and balanced meals for all residents. We have an excellent house chef, who will be more than willing to accommodate any specific dietary requirements.

You can avail of meals in our dining room or, if you prefer, meals can be provided in the comfort of your own room at your request. Should you wish for your relative or friend to assist you during mealtimes this can be accommodated. We would also be delighted if your relatives or friends join us for the many special occasions and events held throughout the year.

Residents can avail of tea, coffee and other beverages at any time throughout the day. These are also regularly available mid-morning, mid-afternoon and evening time.

We offer a variety of different snacks throughout the day, such as assorted sandwiches, seasonal fruits, yoghurts and cakes.

We have a Residents Food Committee which meets every six weeks which the Head Chef attends. These meetings allow you to raise any issues or suggestions you may have regarding the food and catering in Ashford House. 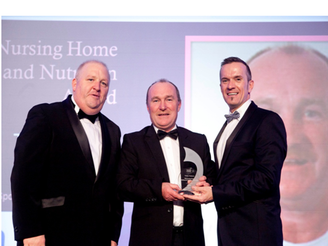